[Intro: King Von]
(Turn me up, Josh)
Alright, 'cause he really a ho
(Ayo, Vani)
Like, he really like
You know, he probably told him
Like you know when we came up in there
(Ayy, Young Cutta, turn up)
He got up outta them ways in Cali
And shit, we came, they tryna check my hand, but well
Like that's the section, I told him all the time
I told him he better get on his ass
Have him duckin' and shit

[Verse]
Sheroid was a cool nigga
A real nigga, not stupid
I heard J-Money move loose with it
He the one that's at the roof with it
He think he tough, you got your clips extended
Been on my own, I'm finna independent
I love you too but I don't know your feelings
You ain't gotta tell me 'cause I know the difference
I wash my pain away with painkillers
No new friends, I'm with the same niggas
Came from nothin', you see what fame give us?
They went to jail to kill the main niggas
Baby momma realer than some day ones
I gotta stash the drugs whenever they come
I made "Dis Ain’t What U Want" inside the basement
Stayed alive inside the trenches, yeah, I made it
What's-his-name would've been around but he hate it
I fell off with my sound and they faded
Look at me now, I'm shittin' in they faces
Them billions close around, I can taste it
Bitches stealin' kids, they tryna take it out my testicles
I was fuckin' strippers, I was actin' unprofessional
Lookin' at my son and I tell him, "I'ma better you"
And that shit we doin', we get caught, we goin' federal
I won't say it no more, you get Dior, you actin' sexual
All the opps unhealthy but I know a couple vegetable
Leave me alone, I don't wanna talk anymore
And I found myself, I ain't feelin' lost no more
Good weed with the cold don't make me cough no more
The reason niggas dyin', it ain't my fault no more
He on 11's block, he not about it no more
He died off the pill, he don't wanna pop no more
[Chorus]
Who told me death is easy?
Who told me death is easy?
Like why you leave me?
Why you tell me?
Why you tell me that death is easy?
Then bleed like we bleed
Then bleed like we bleed
Then bleed like we bleed 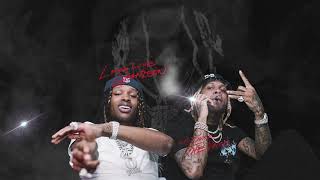 And dark are my days now that I face them on my own So long arе the nights now that I'm sleeping here alonе And after all of this time, it's still just as hard to see you...

▷ Citizen Soldier - If I Surrender TEKST

So let me fall, let me break Under everything unsaid Just let me die 'cause I can't take Living with what's in my head If I surrender, surrender To the monsters in...