[Verse 1]
My cellie was twenty-three but he got ninety-six
And he ain't even get caught for no murder, he was just movin' bricks
And he be tryin' to talk to the female pilot whenever I'm on a jet
He told me his best-friend told on him but I ain't wanna hear the rest
See, the one that killed my blood, laying in blood, I can rest
And I woke up in my feelings, feel like I drunk a pint of stress
And I woke up, damn near slapped her shit, I blamed it on two racks
And I love her ass to death, I hold my breath so I can't flex

[Verse 2]
I was devastated
Spot 'em, got 'em, whenever I see him, this shit ain't premeditated
Fell out with Wook, I say I dislike him but I'll never hate him
We locked back in, we feel like zero, Jayson Tatum
It's been a long, long time, been a long time since I seen her
Talkin' 'bout my daughter, not a bitch 'cause that don't mean nothin'
Gotta count my blessings, that's good karma like I ain't see it coming
Gang fights in school, I still salute like I ain't see you runnin'
And they'll watch you starvin', low income, low-key apartment
I mean abandoned apartment, Glock with a switch when I aim at a target
Audemars diamonds flawless, I'm the voice, honest
(Mixed up in violence) I'm just being honest
[Chorus]
The Voice
The Voice
The Voice
The Voice, The Voice, The Voice

They tell me it's all love, but I love all I'm CashApp-in' a couple hundred whenever my brother call Sometimes I like to scan the ledge, feel like I'm above 'em... 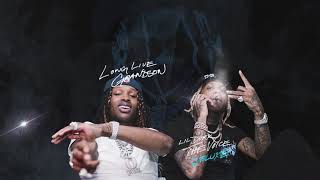