[Verse 1]
Oh, five times, nigga, hit my brother with that iron, he ain't die and you know he shot back
I been missin' Kay since I told her for to go and I know she'll never come back
Millionaire with no million-dollar house, you do you and I'm good with that
Nene left and they saw I was sad, saw me down, thought I'd never shake back
Put a twenty on top of that twenty, come out forty mil', and I'm fuckin' with that
In the booth like the trap and I'm servin', the man of the year, that's the number-one plaque
They ain't want me to win when I turned up my swag
At thе Holiday Inn with a secondary strap
I done stopped ovеr here for to fuck with my bills, I'm gon' slime my way back to the Nawf after that
He watch the rearview, he know if it's gon' only come out with his head on the dash
No, they don't like me but I keep my foot on they neck, and they know that I step on the gas
Know that my brother, he gotta get mutual respect and if you disrespect, that's your ass
I did this shit that's forever gon' sit on my heart
For that bag, it was part of the plan

[Chorus]
He is a lost soul survivor
And assassination been attempted from rivals
And he say that they all gon' die
When talons fly, they wanna wash away your life, who they desire

[Verse 2]
Drop a bag, leave him dead for the shit that he said
He been focused on rap, and I'm straight with the killing
Get the drop, I been waitin', but I know we gon' get it
Youngin' bangin' the strap at the top of his fitted
Thirty shots at the car, and they still ain't hit me
I be fine 'cause I know that my ancestor with me
I be aided all night too whenever I'm out
Took the top off that Audi, turned that bitch to a sprinter
I took so many losses and came out a winner
On the block, I'ma clap 'em when we up in the winter
They know that a nigga been dealin' with feelings
I'm not lovin' these women or fuckin' with niggas
Look at myself, I see blood on the picture
Remove 'em and then I get back to them digits
I throw a fifty, that tension, the ditch him
The reason he slumped, DOA in the Bentley
They don't know everything I did for this
Bang it off back-to-back, I live for this
In the northside sick, they ain't cure the kid
See that boy out of line and I zip the bitch
I give these niggas a energy kick
In the Benz with a Spider and a eight in that bitch
Standin' on business, I cater the list
Leave him dead in a foreign on the side his kid


[Chorus]
He is a lost soul survivor
And assassination been attempted from rivals
And he say that they all gon' die
When talons fly, they wanna wash away your life, who they desire

[Outro]
I keep you rollin', this life that I chosen, got the one creep up on me
I be posted where the sun don't shine
And this the life of a shotta, I say that it's so deep (And, oh)
(Get it on 'til we can't for YoungBoy, sendin' shots through the night)
(Lone soul, stuntin' down, no, he ain't, say he gon' be the last one to survive) 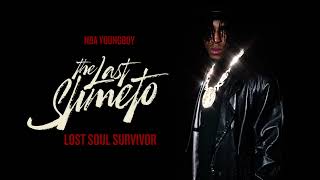 Let's make some bad decisions I want you, ooh, baby, all of the time So give me all your kisses I want you Monday, Tuesday, Wednesday, baby, every night

▷ Amon Amarth - Find a Way or Make One TEKST