Savage Ga$p - Pumpkins Scream In the Dead of Night

Tekst piosenki Pumpkins Scream In the Dead of Night


[Intro]
Gasper, what the hell you doin'?

[Verse 1: Savage Ga$p]
I just had to do ?em on my own shit
I just had to do her on some cold shit
I just got these bitches in my cold crib
Know you see me lookin' like a ghost, bitch
Ayy, like a ghost, bitch
I just seen 'em lookin? when I rode in
Ayy, on some ho shit
I just hit it once and then I hoed it
Young Jack in a bad ho
I been in the cut, lookin' spooky in a black coat (Bitch)
And she fuckin' with my tats though
I don't know her name but I just know I'm finna clap though, ayy

[Verse 2: Savage Ga$p]
Look, and I been gettin? bands, no Green Days
I been fuckin' beefed off a bean for a week straight
Gas, 93, hit a team play
Catch me in a graveyard, posted where the fiends stay, look
Ayy, and I?m up in her guts, no dessert, uh
Got these bitches jumpin' out they t-shirt
And I just got a chain for my bro
And I'm finna get my own, but my brothers gotta eat first
Look, and I don't text hoes
I?ll just send 'em out like strep throat
And I don't even really wanna feeShinigami told me, "Kill 'em," I said, "Let me grab my death note note"

[Verse 3: shinigami]
October (Bitch), it's a nightmare
Feelin' like Jack, I'm a king, you're a poser
Fuck out the way, if you see me, move over
If you can't hear me, lil' bitch, move closer (Damn)
Yuh, and you can't see me, I'm a ghost
Got this smoke in my throat
Can't feel my face, I'm 'boutta choke ('Boutta choke)
I been on the road, fuck the pressure, I won't fold
I been chillin' with Gasper in Winterville, and it's cold
I don't listen for shit, I don't ever do what I'm told
That's why these labels are tired 'cause I just can't be controlled
I got chains on my body, lookin' part decomposed
Bloody ice on my wrist, like subzero, on froze, bitch (Bitch)

Teledysk do piosenki Pumpkins Scream In the Dead of Night 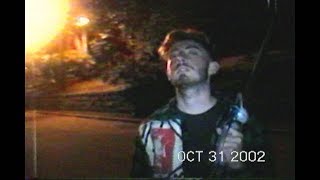