There's a psychopath, in Russia he's the boss
He does judo, hunts, he rides shirtless on a horse
For twenty years he wins every election
With a hundred and seven percentage of the votes

Look outside the window and it's World War III
Russian army bombed last night
Bloody Vlady thought he'll have us on our knees
We won't go down without a fight
We're not back in the USSR
It's Kyiv, not Putingrad, blyat!1
Not back in the USSR

Economic sanctions, millions of refugees
We cannot afford to fail
Russians sent to jail for attempt of free speech
Granny makes a Molotov cocktail
We're not back in the USSR
We will not have you as tsar, Vlad
Not back in the USSR

Русский военный корабль, иди на хуй!2 1. blyat (Блять) is a Russian swearword that literally means "whore" 2. "Russian warship, go fuck yourself". It's the reply of Ukrainian soldiers on Snake Island attacked by Russia on 24 February 2022. Russian warship's crew asked Ukrainians to give up. 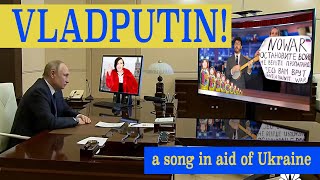