[Verse]
All them dawgs that watch yo' moves you gotta play 'em close
All them drugs stacked in one crib, that's what get raided most
I know one nigga who love to kill but he get faded first
You say Nuski name in vain, that's who gon' get it worst
Chasing who? Not chasing hoes, we chase the millions first
I had them hoes in my DM when I had a Nicki verse
I'll cash you out for a whole thirty, you gotta get 'em first
You mix the ecstasy and Percocets, you itch the worst
Some of my homies played back then, they know they still bogus
Quiet as kept, that door still opеn
And my niggas on what I'm on and I don't feel bogus
My mind eighty percent in thе streets and I'm still focused
Who gave me hope when I need it?
'Nine and .22, gave the streets what they want, got 'em thinking that they beefing
Know what oppositions say, he quick, they think he Jesus
Told him he the only one get a pass, that nigga believed us
How you think you still real? You tricked up on your guys and shit
How you think you still 300? You switched up on your guys and shit
Letter to the opps, y'all niggas tricking on y'all lives and shit
Big teeth and end up in the casket, make 'em slide again
Went in for another bond but he got denied again
Cory Brooks told me slow down, but it's my pride again
Every time a nigga died, they'll blame my side again
And every bitch I fuck, I tell her bring her side of friends
Love me or hate me, bitches say I'm crazy, they don't wanna date me, oh
Love me or hate me, I ain't grow up rich, so the trenches, they made me, oh
I was finger fucking pistols 'fore I ever got a chance to go and finger fuck these bitches, oh
I'm regretting how I was raised, all my niggas went to jail, I had to fuck with different niggas, woah
Fucking fancy bitches, got her dancing with the stars, got it feeling like a groupie ho
When I pull up in the trenches, they surround me by some killers, but I know that's how they do me now
[Outro]
When I be saying I'm the voice, I don't be tryna like
Tryna run niggas or tell 'em what to do or nothing like that
I just feel that the streets'll listen to me
And I'm saying that shit different, you know

Teledysk do piosenki Switched Up

They tell me it's all love, but I love all I'm CashApp-in' a couple hundred whenever my brother call Sometimes I like to scan the ledge, feel like I'm above 'em... 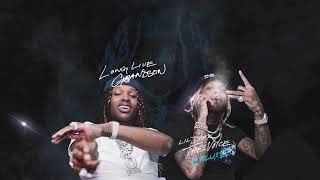