Tekst piosenki Face of My City


[Chorus: Jack Harlow]
I'm the face of my city
Cosigned by Diddy
Hard liquor, I'm shitty
Hotel with some bitty
Got her doing my bidding
You changed, no kidding
Wasn't always this pretty

[Verse 1: Jack Harlow]
Runway me, I'm fitting, fourth-quarter, ninth inning
Ain't no way we ain't winning
Back home for a week, ain't no way we ain't sinning
If she came to stay with me, ain't no way she ain't pretty
Got the 808 hitting
Y'all some internet thugs, won't come face to face with me
Y'all would hate to play with me
Tummy tuck it one time, she'll pay to stay skinny
I done been on that road, I done ate some great Denny's, yeah
And some Cracker Barrel
Little brothеr with me selling Jack apparel
Shе a rich girl, she done had Camaros
Cheaper to keep her Willy Caballero
White boy with a little habanero
I just hit a hundred, I was at a zero
I'm a big boss, you just at a bureau
Hometown hero, tell 'em add a mural
[Chorus: Jack Harlow]
I'm the face of my city
Cosigned by Diddy
Hard liquor, I'm shitty
Hotel with some bitty
Got her doing my bidding
You changed, no kidding
Wasn't always this pretty

[Verse 2: Lil Baby]
I'm the man in my city (Yeah), niggas can't fuck with me (Nah)
Bookbag three fifty (Cash), got my hand on my blicky
Might swag, I don't dance for real
First come then I'm paying her bills
Niggas bums, they got nowhere to live
I ain't chasing nothing but me some M's
I ain't beefing with them niggas, they kids
I should put 'em over my knee and spank 'em
I was thinking that they would've been thankful
Pretty bitch and she be killing them angles
We turn a killer right into an angel
I start demolishing shit when I'm angry
Boy, don't be following me, that shit dangerous
Still in apartments, my lil' hitters banging
I repped my projects before I was famous
Straight from the bottom, you know I ain't changing
Everything cash, you know how I play it
Fuck like I love her, she know I ain't staying
Pass her to dog and you know how I'm playing
Act like I'm dumb but you know I ain't crazy
Big Baby
[Chorus: Jack Harlow with Lil Baby]
I'm the face of my city
Cosigned by Diddy
Hard liquor, I'm shitty
Hotel with some bitty
Got her doing my bidding
You changed, no kidding
Wasn't always this pretty

Teledysk do piosenki Face of My City

Y'all ain't get to see what I foresaw coming Now the team overseas out in Warsaw, stuntin' (Ooh!) Talk tough to me, catch a northpaw from it Ass fat, let me pull the booty... 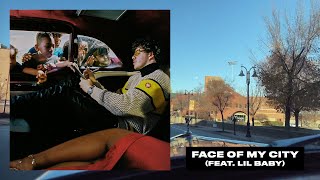 It was great while it lasted, oh yeah And together we smashed it, oh yeah There's just one more thing to do, oh yeah I know that I can keep a secret, baby can you...

I really wanna change the world, but can't change my clothes Wanna find a girl, but can't find my phone I just lie in bed 'til the afternoon...